Difference between revisions of "Easter eggs" 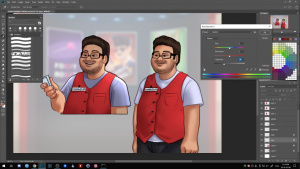 One way to show the streamer’s appreciation for his fans is to insert their names directly into the game: 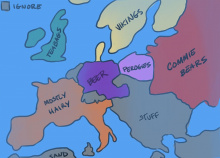 In Erik’s locker, the Dungeon’N Orcettes figures are a parody of the fantasy role‐playing game Dungeons & Dragons.

Erik also collects cards of Magic the Fappening, a game similar to the real Magic: The Gathering. Four trading cards can be found in Summertime Saga, each one with a colorful name.

In order to stay in line with the game’s mood, the name of the Japanese console manufacturer has been changed to Sintendo.

Street Kombat is a mix between both games. We readily recognize the names of playable fighters: Balrog and Honda.

On the main character’s or Jenny’s computer, the video game Summertime Saga can be played. However, it crashes, reproducing a frequent feature of the real game every time a new version is released. This was especially true when DarkCookie was doing the coding only by himself in the first releases.

“I took an arrow in the knee”, delivered by Erik, is a memorable quote originating from a role‐playing video game.

Erik, Justin and Karl are avid players of the video game World of Orcette whose name is derived from the massively multiplayer online game World of Warcraft. And the saying “For the Whored!” imitates the scream “For the Horde!” from the same game.

The trading site eGay is pinned on the main character’s computer screen, and references eBay.

Sluttygram is the fictional version of Instagram, a photo and video‐sharing social networking service.

The web browser developed by Microsoft is renamed Internet Sexplorer.

The main character dislikes Attack on Colossus, an opinion shared by DarkCookie for the real serie.

When the main character has to meet a drug dealer in Roxxy’s route, he opts for the disguise of Walter White/Heisenberg. This character was a crystal meth maker and the most‐wanted criminal during the 5 seasons of the Breaking Bad series.

If you liked Captain America, you’ll love Sergeant Somalia, Summertime Saga version of the superhero from Marvel Universe. The film, screened in CineSaga Theater, is indeed dedicated to a sexy Somalian guy who can only be DarkCookie!

The way Harold puts his Aviator’s sunglasses while delivering a one‐liner, copies a popular meme from the series starring David Caruso.

While they’re watching it on television together, the main character and Jenny have a little chit‐chat about the series called Pals. The depiction of a group of friends living in Manhattan, and the names of the characters – Matt and Courtney – make the reference to the original Friends series more than obvious. If necessary, the plot of the episode is reminiscent of the one called The One With All The Thanksgivings.

When the main character is introduced to Sugartats members, he interrupts an important discussion about the horror movies. Tuuku claims that the clown in It is the most frightening thing.

In the same conversation, Grace recounts the story of a curse transmitted through sex. This is the scenario of the independent film It Follows.

The close‐up on the bed in Diane’s bedroom displays the fictional character Pickle Rick in the blurred background.

The main artist regularly asks the viewers for their opinion during his live videos, whether for the drawing or the name of items or locations. Here is a non‐exhaustive list of this content.

The Box of Shame

The Box of Shame origin dates back to when DarkCookie was doing the treehouse location; raffles were done where winners could add any item of choice for the box. Quite an opportunity!
The first winner wanted an old pair of panties, which was at first regarded as a waste by chat and DarkCookie. New raffles were made to find people with better ideas for the content of the box. However for some reason all winners failed to come up with any solid ideas so DarkCookie ended up adding the panties, since this was the only actual suggestion made from a raffle winner, and a pair of binoculars suggested by chat.
All the names of the winners were crossed over and the box was named The Box of Shame.

A raffle was held during a stream to choose a name for the newly added hill overlooking the town. The only name the winner could come up with was Yaya Hill, a name that made everyone laugh for its bland sounding. A new raffle was done. RavenClaw won and pick the name Raven Hill.

The sign hanging from the tent on the roof of the tattoo parlor, says “Home Run”, according to Zotan123’s choice, a viewer randomly picked.

The drawing of the ticket for the local movie theater was also the occasion for a raffle in which the winner could choose the text.

A poster and a book both titled It’s a trap! can be discovered in‐game. They are an inside joke about the presence in Summertime Saga of a trap character – a male character depicted as a female. This rumor is a recurring subject within the community.

The apple in the microwave

DarkCookie once explained that he didn’t like cold apples and used the microwave to warm them up. Since the chat thought how silly this habit was, a lot of jokes were made, and soon an apple in a microwave was added in the teachers’ lounge at school.

Located on the left wall in Erik’s basement hangs a shirt similar to the uniform of the Chicago Cubs. This item is an homage for the baseball team to finally end the so‐called Curse of the Billy Goat, and the longest World Series championship drought in history.

In Judith’s locker is an obvious reference to the soft drink Mountain Dew.

DarkCookie being a lover of disco single “Kung Fu Fighting” from Carl Douglas, to the point of inflicting it daily on his stream viewers, it was predictable that this martial art would be mentioned in the game, as when Jenny and the main character watch TV.

Also in Dexter’s locker, a bag of Gayto brand chips can be found with a deliberate misspelling.