Erik is the main character’s best friend and they study at the same school. He lives with his landlady, Tammy Johnson.

Erik is a chubby teen of short stature, with wavy chestnut hair and brown eyes. To top it off, his face is decorated with oversized glasses and freckles.

A green T‐shirt with blue pants constitutes his sole apparel.

Erik is a stereotypical computer nerd. He is an awkward gamer shut‐in who doesn’t socialize much. However, he’s the main character’s sidekick, always willing to help him perform just about any tasks. Showing more interest in orcettes than in real girls, his attitude sometimes worries those around him.

For the complete walkthrough, see Tammy and June’s route.

Just like his best friend, Erik lost his father but at a young age. He’s sharing a special bond with Mrs. Johnson. Through her constant attention, the lady regularly relies on the support of the main character for his friend. His pudgy appearance is the subject of familiar nicknames.

Erik is an enthusiastic player of the video game World of Orcette, where he is known as “Erik the Mighty” among the guild members, including Justin and Karl. All three are also fans of the popular wrestler called Pink Cyclone.

The friendship between the main character and Erik will save them from many situations. 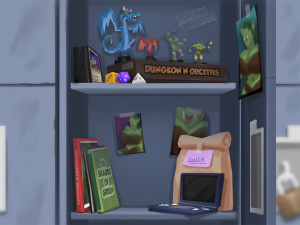