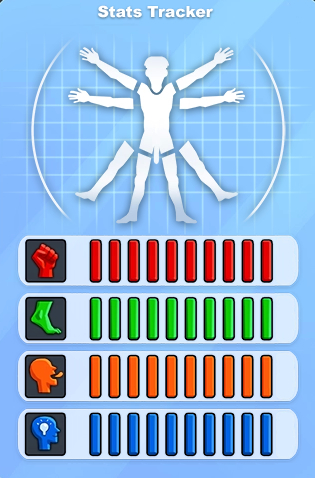 The stats tracker is a game functionality that shows how good is the main character in four skills: Strength, Dexterity, Charisma and Intelligence. Each statistic starts at 0 points in a new game and reaches a maximum of 10 points after ten successful training sessions. With the cheat mode enabled, they are already maxed out but the player can reset them individually by talking to the characters in charge of the trainings.

Every time the dialogue displays [STR], [DEX], [CHR] or [INT], it means that the corresponding skill is not sufficient and that more training is expected. They unlock specific answers or actions to help the player to progress in the routes. As a result, higher are the main character’s stats, further the player can advance in game.

Improving them is not an easy task and relies on the minigames found during the adventure. Their mechanisms are detailed on their dedicated pages. The stats tracker screen can be accessed from the phone menu at the top of the screen.

Some action scenes has a strength stat check in order to pass them. It also increases actions completion rate. The stat can be improved through the weightlifting minigame at the gym. But first, Kevin has to be convinced to spots the main character: talk to him in the cafeteria in the second floor of the school, then find a way to trade with Erik.

Dexterity stat allows for longer time to complete input of commands. It is gained through Muay Thai minigame in the gym. Master Somrak will agree to train his art in exchange for a special compensation.

Charisma stat unlocks new dialogue options. It’s improved by succeeding in the rap battle minigame in the park at night. The player will have to surpass three opponents.

Intelligence stat unlocks new dialogue options. Playing the Maze Runner minigame on the monitor in the main character’s bedroom will give more intelligence. The computer needs to be repaired first with the parts bought for $200 from Consum-R.