The main character is the player’s incarnation in Summertime Saga, and as such, is called by a name chosen by the player at the beginning of the game. He is the protagonist around whom the multiple stories are being written, but also the narrator of these events.

His only known family relationship is his deceased father.

The main character is an eighteen‐year‐old teenager. He is slim, has an average height, short brown hair, and grey eyes. He appears heavily endowed in his private parts, to the point of arousing a certain curiosity among those who witness it.

He displays no frivolity and is satisfied with a plain white T‐shirt and orange shorts.

He is quiet and reserved, and keeps an optimistic smile on his face even in difficult times. Overcoming the ordeal of his father’s loss, the main character’s strength lies in his unwavering drive to go through life.

The main character is altruistic and kind, trying to help anyone before his own priorities. Resolute when coming to stand up for what is wrong, he is always here to defend those who are bullied, especially Judith and Erik.

Although a charmer, the main character is hugely ignorant about sex in general. He knows what it is, but whenever any sexual encounter happens to fall into his lap, he usually has the women take the lead.

The story starts with the main character attending his father’s burial. He presently lives with Debbie, a friend of his father, and Jenny, her egotistical tenant. Both of them are in financial trouble, with Debbie threatened to pay off an old debt. He now has to juggle with school life, finding a part‐time job, severe debt, and getting a date. But the main character can count on his friends and the local figures to assist him in his journey! 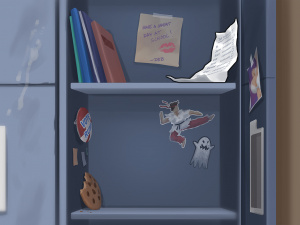 Cookies and kung‐fu are his main interests
Retrieved from "https://wiki.summertimesaga.com/index.php?title=Main_character&oldid=25494"
Categories: