Kevin is a student at the main character’s school, and his workout trainer for weightlifting at the gym.

Kevin is a lean teen of tall stature with half‐combed brown hair and brown eyes.

His typical attire of a teal T‐shirt and dark shorts.

A healthy mind in a healthy body is Kevin’s motto. Very active, he boasts about his musculature and pushes the main character of getting to the gym too. When a favor is done to him, he is willing to return it back of his own. A true bro he is.

It’s also heavily implied, if not outright stated, that Kevin is gay. His homosexuality is one of the more well‐known secrets of the school.

Kevin also has a job at the school’s cafeteria. He’ll agree to spot the strength training of the main character in exchange for his replacement by Erik for the lunch duty. Then he will move into Planet Thiccness in the mornings. 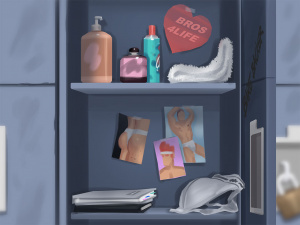 His locker shows his strong preference for men
Retrieved from "https://wiki.summertimesaga.com/index.php?title=Kevin&oldid=24858"
Categories: