Roxanne, better known as Roxxy, is a student at the main character’s school. She is the daughter of Crystal and the cousin of Clyde.

Roxxy is a teenager with long blond hair, blue eyes, and a generous bust.

Her daily wardrobe is a tight pink tank top which barely covers her dark‐purple bra, and grey hot pants. Her nail polish matches the color of her underwear. Silver earrings, navel piercing, and red bracelet complete her appearance.

Just like her boyfriend Dexter, she comes across as smug, thinking the world revolves around her. She is a self‐proclaimed “Alpha bitch” who enjoys ordering her friends, Becca and Missy, around. She also has an almost complete disregard for rules, and a scorn for all things academic in general, unless it affects her ability to be a cheerleader.

Her family is reduced to her mother Crystal, a woman more interested in alcohol than in her education, and a stupid cousin named Clyde. Not sharing any affinity with them, she spends most of her time with her group and boyfriend. She doesn’t know her father and it appears that even Crystal doesn’t have the slightest idea about him.

Roxxy lives in a trailer where she shares the only tiny bedroom. This miserable life fills the girl with a shame she hides by playing over her popularity at school. However, her true self is gradually revealed as the main character tends to support her.

How far is Roxxy willing to go for the main character to give her his French homework?

The Bigger, the Better?

When Jenny and Roxxy compare their cheerleading techniques, this also includes their breast size!

Becca and Missy prevent the main character from getting into the boys’ locker showers. He convinces them using the right words and can thus enjoy a nice glimpse on Roxxy’s curves.

Dogeek stole her cheerleader uniform. If the main character gets the cloth back, Roxxy may cheer him in her own way.

A picnic, a storm, and here comes Roxxy undressing in front of him. The main character would not have missed that.

For the bikini contest, Roxxy wants all parts of her body to be covered with oil, all of them!

The main character must overcome many hardships, and several of them involve Dexter. But what wouldn’t he do to have sex with Roxxy in the trailer?

Sex in the Locker

Since it has room for two, Roxxy plans to benefit from the locker space at her convenience.

The main character learns a new game with the gang of girls at the beach. And the stakes are increasing… 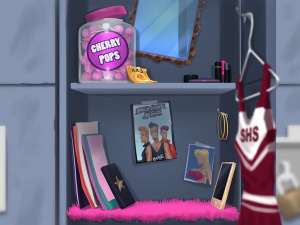