Dexter is a student at the main character’s school, and Roxxy’s boyfriend.

Dexter is an intimidating muscular jock of tall stature with a blond military cut and blue eyes.

A black tank top and blue‐and‐white basketball shorts are his usual clothing.

Dexter comes across as a smug jerk. He is tactless, insolent, and as dumb as a moss‐covered rock. The term Neanderthal fits Dexter perfectly. Violently covetous of his girlfriend, Roxxy, he is used to threatening anyone that shows any interest in her. Certain of his own skills, he challenges the main character in various games. However, he hides a little secret!

Dexter is the average sports jock dating an equally average popular girl as his girlfriend. He’s the bully of the school and frequently attacks the main character and Erik. Against all odds, Dexter is also the student well‐being representative. No one could approach his girlfriend without having to deal with him first. 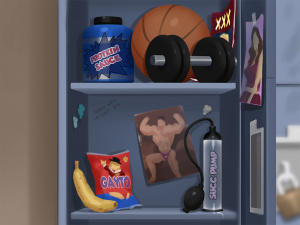 Dexter is all muscle, but nothing more
Retrieved from "https://wiki.summertimesaga.com/index.php?title=Dexter&oldid=24839"
Categories: