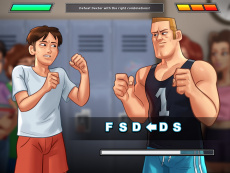 Dexter doesn’t let you touch his girlfriend without a fight

The final face‐to‐face between the main character and Dexter is held in the school hall, at the end of Roxxy’s route, while playing the Dexter fight minigame. It is similar to Master Somrak’s training but relies on strength and dexterity statistics.

Tap or press the right combination of 6 keys in the allotted time. The white bar under the given sequence indicates how much time is left. Dexterity gives you more time to press the keys: be sure to have at least 2 points in this stat. If the time is over then Dexter gives a punch that invariably KO’s the main character and causes the minigame to fail.

Roxxy’s ex‐boyfriend has 6 health points divided into three bars when the main character has only 1 health point in a single bar. Each set is respectively displayed above the characters’ heads. Having at least 5 in strength doubles the damage the main character does, making it possible to knock out the bully in three hits.

Defeating Dexter lets the player progress in Roxxy’s route. Otherwise, the game over screen invites for another fight, or to discard the confrontation if the cheat mode is on.