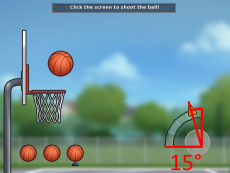 Put three balls in the basket to win the challenge

The basketball minigame is the second challenge that sees the main character and Dexter face off in Roxxy’s route. However, it can be played again after defeating Dexter, by clicking on the basketball court equipment. The object of the game is to make a free throw and get the ball through the basket.

Click or tap the screen to shoot the ball. You have to score three times with only 3 tries - represented by the balls at the bottom left. The meter on the right side displays the angle of the shot as the arrow swings between horizontal and vertical position, the middle of the arrow itself is the marker when making the shot. The best angle is about 15° from the top. Beware of the backboard which causes the ball to bounce if touched. This minigame has no time limit.

Successfully throwing all three balls in the basket lets the player progress in Roxxy’s route. If the minigame fails, it can be restarted with one click on the basketball board during the day. An option to skip the minigame is proposed if the cheat mode has been selected at the beginning of the game.