Annie is a student at the main character’s school, and the daughter of Lucy and Richard.

Annie is a teen with titian hair and brown eyes. She keeps her hair in a broad French braid.

Her school uniform is a burgundy‐and‐yellow jacket, a cream‐colored poplin shirt under it, and a blue skirt.

Annie is a strict authoritarian, following her model Principal Smith. She takes her duties seriously and has no time for antics. Her cold standing turns many people away as she is focused on her responsibilities and is not fond of idle chit‐chat. She shows an unfailing devotion to the principal even in the most embarrassing moments. Often defending her father, Annie seems to idolize him according to her mother.

Student Union President and official hall monitor, Annie makes her position no joke. On multiple occasions she encounters the main character revealing his erection to female classmates, and reports the inappropriate behavior to the principal.

After such a terrible start, how will the main character get closer to her?

In the boys’ locker room, Judith and the main character both undress. Annie witnesses his erection resulting from the sight of Judith’s naked body.

He Doesn’t Look That Big to Me

In the boys’ locker room showers, the main character’s little show is interrupted by Annie who escorts him to the principal’s office.

In Principal Smith’s office, Annie exposes her breasts to the main character so as to provide him with appropriate visual stimulus. 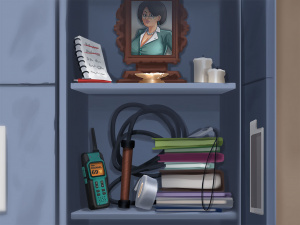 Her idolatry for the principal is expressed even in her locker
Retrieved from "https://wiki.summertimesaga.com/index.php?title=Annie&oldid=25499"
Categories: