Ronda is a student at the main character’s school, and the daughter of Earl.

Ronda is a fit, African American teen who has brown eyes. Her brown curly hair is gathered in a ponytail by a green hair tie.

Her casual outfit is a grey top and a green pant. But as an accomplished sportswoman, she changes into a red‐and‐white tracksuit or a swimsuit during her workouts.

Ronda is an all‐around athlete, proud of being part of the track team. Her numerous activities compel the admiration of the other school students. With her competitive temper, she looks down on people who don’t have the tenacity to do sports. Ronda sees the main character as someone physically weak and hates his lack of exertion.

She is training day in, day out to secure a scholarship and doesn’t allow herself any ease, especially with the upcoming regional athletics trials. Her aversion for the main character increases after he has some private time with the lifeguard at the pool. Could it be envy?

Quick overview
Tie Me Up! Tie Me Down!

Upon entering the principal’s office, the main character finds Ronda in a bad situation. 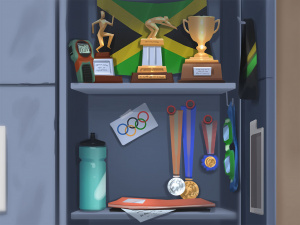 Ronda is aiming for the Olympics
Retrieved from "https://wiki.summertimesaga.com/index.php?title=Ronda&oldid=25498"
Categories: